10 metre air rifle is an International Shooting Sports Federation (ISSF) shooting event, shot over a distance of 10 metres (10.94 yards) from an unsupported standing position with a 4.5 mm (0.177 in) calibre air rifle with a maximum weight of 5.5 kg (12.13 lb). It is shot by both men and women in competitions from club level to the Olympic Games. Most rifles use compressed air (sometimes CO2 gas) to propel the pellet to the target. The use of specialised clothing is allowed to improve the stability of the shooting position and prevent chronic back injury which can be caused by the asymmetric offset load on the spine when the rifle is held in position.

It is one of the ISSF-governed shooting events included in the Olympic Games.
The course of fire is an unlimited number of sighter shots followed by 60 competition shots for men or 40 competition shots for women, all fired within 105 minutes for men or 75 minutes for women. During this initial or qualification phase a maximum of 10 points are awarded for each shot. The top eight shooters follow this with a final 10 shots – each scored to a maximum of 10.9 – with the cumulative score determining the winner. The maximum of 10.9 is derived from an additional set of 10 rings within the centre 10 point circle, increasing in 0.1 point value as the rings approach the centre of the target. The competition is won by the shooter who reaches the highest score in the final.
Shots are fired from the standing position only, as opposed to some other air gun shooting disciplines such as for three positions (popular in the United States) or in disabled sports.

For the 10 metre air rifle and air pistol disciplines match diablo pellets are used. These pellets have wad-cutter heads, meaning the front is (nearly) flat, that leave clean round holes in paper targets for easy scoring. Match pellets are offered in tins and more elaborate packaging's that avoid deformation and other damage that could impair their uniformity. 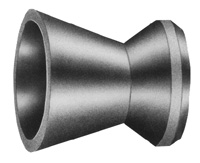 The skills required for this sport are so close to those of smallbore and fullbore shooting that many athletes use the Air Rifle as an indoor winter sport to practice for the outdoor seasons. Air Rifle is shot at 10 meters distance using a target with a 10 ring of 0.4mm (approximately the diameter of a pin head) and the 9 ring is just slightly larger than the .177″ diameter of the pellet.  Because the target is so small, only 1 shot is fired at a target during a competition. 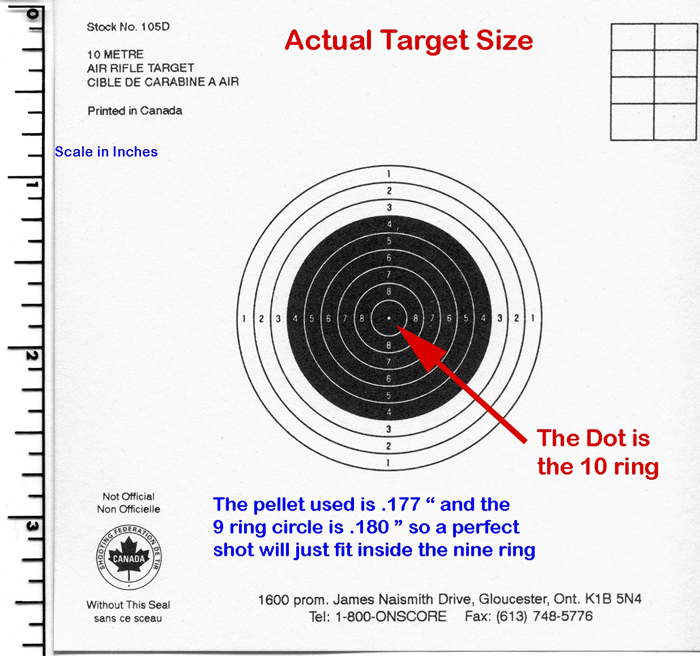 At the end of a regular match a “Finals” is shot.  In the final, each of the eight finalists (top 8 in the open event) have 75 seconds to fire each of their 10 scoring shots.  After all 8 shooters have fired their first shot, it is scored and announced to the spectators and athletes on the line.  The points achieved are subdivided into decimal tenths during the Finals.  For example, a shot that hits directly in the centre of the ten ring counts as a 10.9, whereas a shot just barely touching the ten ring counts as 10.0.  The results from the main match and the final are added together to give an overall match winner.  This adds extra excitement  and stress to the competition for both the athlete and the spectators.

A couple of Feinwerkbau .177 Air Rifles's

10 metre air pistol is an Olympic shooting event governed by the International Shooting Sport Federation (ISSF). It is similar to 10 metre air rifle in that it is shot with 4.5 mm (or .177) calibre air guns at a distance of 10 metres (11 yards), and the programme consists of 60 shots within 105 minutes for men, and 40 shots within 75 minutes for women. It is also similar to 50 metre pistol despite the shorter distance and the use of air guns, and most top-level male shooters compete in both events.
Most pistols use compressed air (sometimes CO2 gas) to propel the 4.5mm (.177 inch) calibre pellet to the target. There are some restrictions on the pistol, and it must be operated by one hand only from a standing, unsupported position. The shooter decides his or her own tempo as long as the maximum time is not exceeded, but in the final round for the top shooters, separate commands are given for each shot so that the audience may follow the progress of the standings.
The major competitions are the Olympic Games every four years and the ISSF World Shooting Championships every four years. In addition, the event is included in the ISSF World Cup and in continental championships, as well as in many other international and national competitions. It is an indoor sport, and on the highest level electronic targets are used instead of the traditional paper targets.

The air pistol range is the same as the air rifle range, giving each shooter a table, a 1 metre wide firing point, and a 10 metre distance between the firing line and the target line. The current rules require ranges to be built indoors, with specified minimum requirements for artificial lighting. Many of the top-level competitions are held at temporary ranges installed in versatile sporting facilities or convention centres.

To promote comfortable and accurate shooting from a standing position match air pistols must have fast lock times, shoot practically recoilless and vibration free and exhibit minimal movement and balance shifts during discharge. The pistol must also be able to be tailored by adjustable user interfaces and various accessories to individual shooters personal preferences. Combined with appropriate match pellets the pistol has to produce a consistent 10 ring performance, so a non maximal result during the initial phase can be attributed to the participant.
The pistols used are gas-driven with a calibre of 4.5 mm (.177 in). The minimum trigger pull weight is 500 gram (17.6 oz), half that of a sport pistol, and the grip restrictions are similar to sport pistols, but the box in which the pistol must fit is much larger: 42 by 20 by 5 cm (17 by 8 by 2 in). This allows for longer sight lines and also gives room for cocking arms, although with a few exceptions (such as the Baikal IZH-46M) modern match air pistols use pre-filled air, or less commonly carbon dioxide, containers. The maximum overall weight is 1.5 kg (3.31 lb). The pistol must be operated by only one hand from a standing position, and may only be loaded with one pellet at a time.

As in other ISSF pistol events, special supportive clothing and shoes are not permitted. Optical aids are allowed as long as they are not mounted on the pistol, which may only have open sights. Ear protection is recommended by the ISSF as well as by coaches, who sometimes stress their usefulness in shutting out distracting noise rather than their necessity for safety reasons (paramount in other shooting disciplines).

It is each shooter's responsibility to get the pistol and shoes validated in a specific area, the equipment control, prior to starting the competition. Clothing is only inspected during the actual competition. To discourage shooters from lowering the trigger pull weight after passing the equipment control, random controls are conducted after the match with failure resulting in immediate disqualification. Flat-soled shoes that do not cover the ankle are the only specialised clothing allowed.