Full-bore target rifle (TR) is a distinctively British and Commonwealth of Nations shooting discipline that evolved from Service rifle (SR) shooting in the late 1860s, and is governed in the UK by the rules of the National Rifle Association, UK (NRA). Similar rules are used in several Commonwealth countries, but the issue in 2009 of the rule book of the International Confederation of Full-bore Rifle Associations (ICFRA) has provided an alternative basis for the administration of the sport.

Modern target rifles are extremely accurate (better than 1/4 inch at 100 yards), and have 'iron' aperture sights which are fully adjustable for elevation and windage.
To level the playing field as much as possible without stifling progress, and to make it possible for riflemen of all budgets to compete seriously, the rifle or all its component parts must be 'readily available in quantity'. This stipulation also keeps faith with the long-standing traditions of the NRA that the rifles used in competition should be of a type that, if necessary, could be readily used for homeland defence.

Full-bore Target Rifle involves prone position single shot precision shooting using 'iron' aperture sights at 'round bull' targets at distances from 300 to 1000 yards, with each shot being carefully scored and analysed. The usual calibre used is 7.62x51 NATO or .308 Winchester. However in recent years, the 6mm BR and the 6.5 x 47 rounds have become more popular, and setting a number of world records. These latter rounds are easier on barrel wear, more accurate, less effected by the wind, cheaper, and have less recoil than the .308 round.

Here is the Century Range during Bisley's Imperial Meeting, with over 300 shooters in a heat. 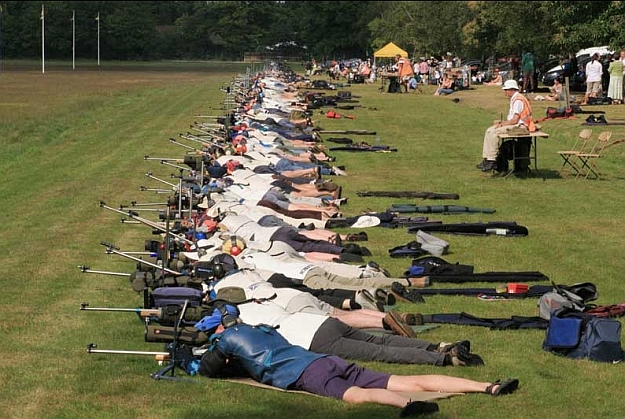 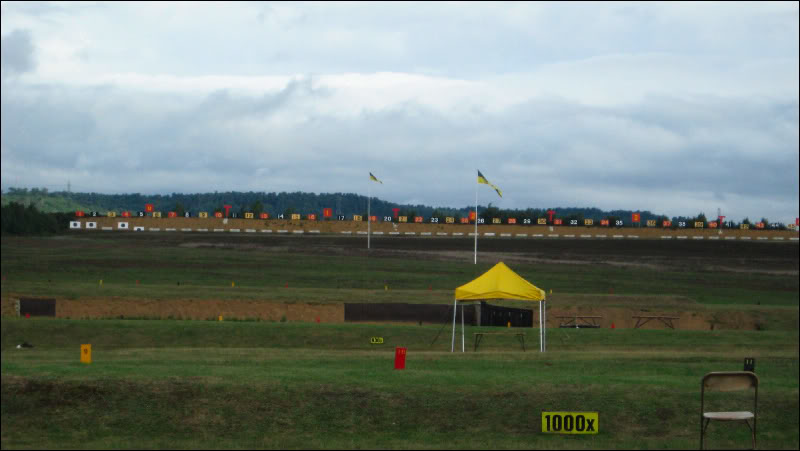 The wind plays a critical role in full-bore target shooting, much more so than in small-bore. When shooting at long range wind can be so strong that it can blow the shot completely off target.

Competitions generally consist of 10 shots with 2 convertible sighter's (known as 2 and 10); however, two other courses of fire are used - 2 and 7 and 2 and 15. Having convertible sighter's means that either both sighter's or your second sighter only can be counted as scoring shots. The reason for this is that you must shoot ten consecutive shots to score. Therefore, it is not possible to convert the first sighter and not the second. This kind of shooting is really all about anticipating the effects of wind, temperature, ammunition charge, bullet weight and shape and how some of these change over the course of the shoot.

Most shooting is done using open sights - no scopes, so the target looks extremely small. The further away the target is the greater effect the wind and other weather factors have on the bullets flight to the target.

Popular amongst older shooters and some younger ones, is F Class where scopes and rests are allowed (below). 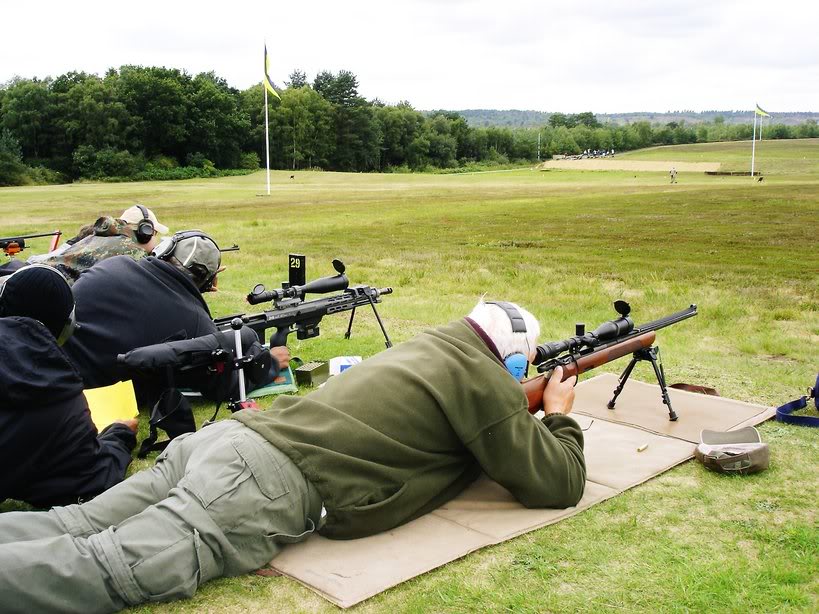 Then there is Match Rifle. Again telescopic sights are allowed, but distances start at 900 yards and go out to 1200 yards - the effective limit of accuracy for the 7.62mm and .308 rounds. This is because the round slows down sufficiently to reach subsonic speed at around 1200 yds, which results in the bullet destabilizing as it crosses the sound barrier.

Match Rifle shooters are allowed some other aids to improve accuracy - hand-loaded ammunition and the supine position, pictured below.

Shooters are either on their own watching the wind and adjusting their sights for themselves or, in team competitions, are coached. The shooter's job is to lie still and shoot; the coach's job is to anticipate the effects of changing conditions and adjust the sights on behalf of the shooter. This requires a very high degree of cooperation, coordination and trust and is probably unique in sport.