What is Field Target?

Field Target is an outdoor air gun discipline originating in the United Kingdom, in the early 1980s, but gaining popularity worldwide.

In United Kingdom rules, competitors aim to shoot the small "kill" zone that forms part of a larger metal faceplate. These face plates are often shaped to resemble small game animals, although there is currently a move towards simple geometric shapes. On most competition targets, the hit zone forms the end of a short lever that tips the faceplate backwards when successfully hit. These targets have to be reset by tugging on a length of cord attached to the faceplate above the hinge. Targets are shot from open "gates" in a firing line, and are divided into "lanes" of two targets each.

Many competitions impose a time restriction of 2 minutes to shoot both targets after a competitor first looks through his or her sights. Targets may be placed at any distance between 8 yards (7.3 m) and 55 yards (50.3 m) from the firing line. Targets are often placed at about the same height as the shooter, but it is not uncommon for them to appear high up banks or in trees, or down steep slopes.

The hit or "kill" zone of a target is always circular, and nominally 40-45 mm in diameter, although "reducer" targets as small as 25 mm diameter may be employed for seated shots up to 35 yards (32 m). The targets are painted with the kill a contrasting colour to aid visibility, although the paint is quickly removed by hits during competitions, making it harder to distinguish.

The majority of shots may be taken in any stance, but the seated position is the most popular due to its stability and often the need to see over logs or long grass that would preclude prone shooting. Most competitors carry a small beanbag or cushion to sit on while shooting. It may also be used under the knee or to support the ankle during kneeling shots, and they are often used as a protective rest for guns while competitors wait their turn to shoot. 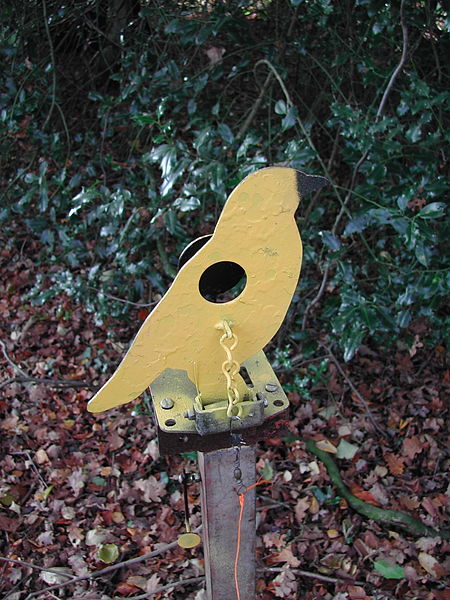 In competition, 20% of the lanes will be designated as compulsory standing or kneeling, and there must be as even a split as possible between the two. Most competitions have 40 targets arranged in 20 lanes, so it is usual to have 2 standing lanes and 2 kneeling lanes. Grand Prix events have 25 lanes, so there will be 2 lanes of one position and 3 of the other. Standing or kneeling targets must be no more than 45 yards (41 m) from the firing line. Points are scored with 1 for a hit (resulting in the faceplate falling), and 0 for a miss (whether it strikes the surrounding faceplate, misses it, or "splits" on the edge of the kill but fails to down the target).

The highest score of a competition forms the benchmark for all the other scores - they are calculated as a percentage of this score rather than the total number of targets. This means that competitors attending a shoot on a windy day will not necessarily affect their average score over a season, as the highest score of the day will probably be lower.

Members of the British Field Target Association (BFTA) are graded according to their performance every six months. Your average percentage score over this period determines which of the four grades you are given - (in ascending order of skill) C, B, A and AA. Prizes at shoots are awarded by grade, so less experienced shooters still have a chance of winning a trophy if they perform well.

Pellets from a .177 inch rifle running near the UK legal limit of 16.27 joules (12 ft.lbf) will drop around 11 cm over 55 yards (50 m) - more than enough to miss the kill of a target completely - so it becomes necessary to compensate for range by adjusting the elevation of the barrel.

Two common methods used are: moving the cross-hairs above the centre of the target by a lesser or greater degree (hold-over), often using markings on the reticule of the scope for reference, or adjusting a knob (turret) on the scope to drop the cross-hairs onto the point of impact for a given range such that the pellet appears to go exactly where you point the gun (except for windage).

Competitors will often carry a small printed table of different ranges with their appropriate drop compensation or calibrate their elevation knob (often using an enlarged knob) - combined with the range-finding ability of the scopes, this allows for very accurate vertical placement of the pellets. 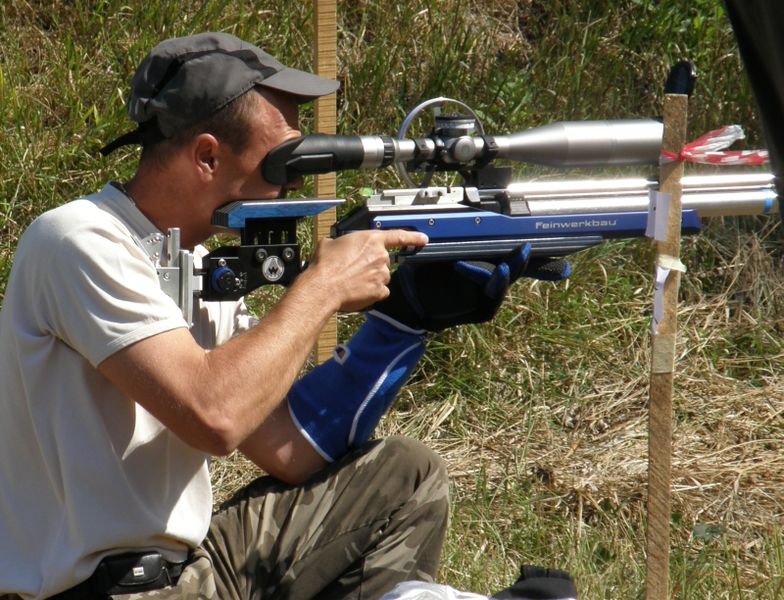 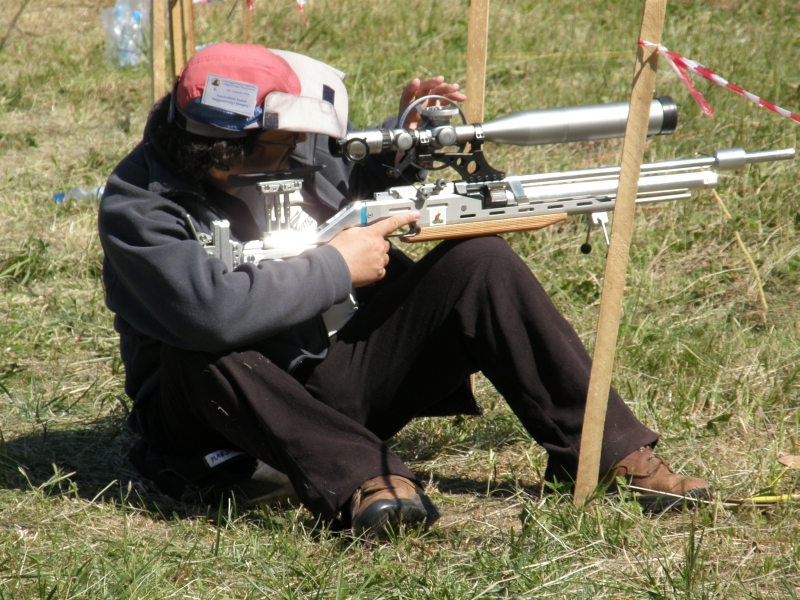 Wind presents probably the largest challenge for an FT shooter - while it is not too difficult to hit even the furthest targets on a perfectly still day with a little practice, mastering shooting in wind can take many years. Pellets can be blown sideways by even a light breeze. At longer distances this can start to cause misses, as the pellet will often be blown onto the faceplate if you aim centrally. In stronger winds it is not uncommon to have to aim completely off the faceplate in order to score a hit, and judging the amount of compensation to apply takes a lot of practice and experience.

Head and tail winds can also have an effect on the trajectory of the pellets, causing them to hit high or low. It is common to fit a "windicator" to the barrel of the rifle - a piece of light cord with a feather on the end will provide a good indicator of general direction in light winds when it may not be entirely obvious, but it does not tell you what the wind will be doing on the way to the target.

Competitors may choose to lift the reset cord of a target off the ground to get a feel for this wind - it will arc gently in a steady crosswind, and may even reveal changes in wind direction caused by nearby trees and foliage. Although many scopes have mechanical adjustment for horizontal offset, it is primarily used to ensure the rifle is shooting straight ahead in still conditions. The variable nature of the wind means it is often easier to aim off target (sometimes called "Kentucky windage" in the US) than to try to adjust the calibration of the cross-hairs.

One measure of the difficulty of a field target shot is the Troyer (named after Brad Troyer). At its simplest, a Troyer is the distance to the target in yards divided by the kill zone diameter in inches. (Obviously, this can be adjusted to meters/mm by multiplying by 2.32.) Thus, if a target is at 45yds and the kill zone is 2in, the difficulty is 45/2 or 22.5T. In practice, there are additional multipliers for various conditions, such as targets over 45 yards, wind, "extremely" dark/light conditions, standing/kneeling positions, and uphill/downhill shots.

A typical course would have a difficulty averaging about 25T with a spread of difficulties from as low as 10T to perhaps as high as 60T. A well-designed course can be used for all field target classes although the PCP shooters will typically outscore the piston shooters. When one is practicing for a match, a good approach is to shoot at targets (whether paper or actual field targets) with a difficulty of about 20T to start.

As one gets better, the difficulty is increased (either by increasing the distance or reducing the size of the kill zone). A good rule-of-thumb would be to increase the difficulty by 5T when one can successfully hit the target 90% of the time. Eventually, one should practice at about 45T if they expect to be competitive at local matches and 60T for national matches.

For more information, download the Introduction to Field Target here. (Click the link to open it in a new window, or Right Click the link and select 'Save As' or 'Save link as...')